Hidden away in the Vaults of Waterloo you will find Aladdin and the Feast of Wonders, an immersive dinning experience, and besides being the most interactive and well written one I’ve seen so far, it is also the filthiest I’ve seen to date. Filthiest ‘anything’ I’ve seen in my life really, not just dining experience/pantomime. I feel like I’ve definitely learned things that evening. So I can also say it was the most educational dining experience I’ve had in my life too. This experience is definitely 18+. Don’t bring your kids, guys.
The show is spectacular and is performed by a cast of Drag Kings and Queens with acting and storyline rivals that of the original Aladdin, though it lacks the same songs.  Aladdin and the Feast of Wonders is probably my favourite version of Aladdin so far, and as much as I love ‘A Whole New World’ I also feel like ‘Work Bitch’ by Britney Spears is a worthy replacement, along with a high number of cheesy 90s song and pop-culture references. Throughout the show you will never stop being captivated by Aladdin, Princess Jizzmine (told you it was filthy), and Jaclose (not to be confused with his uncle, Jafar). 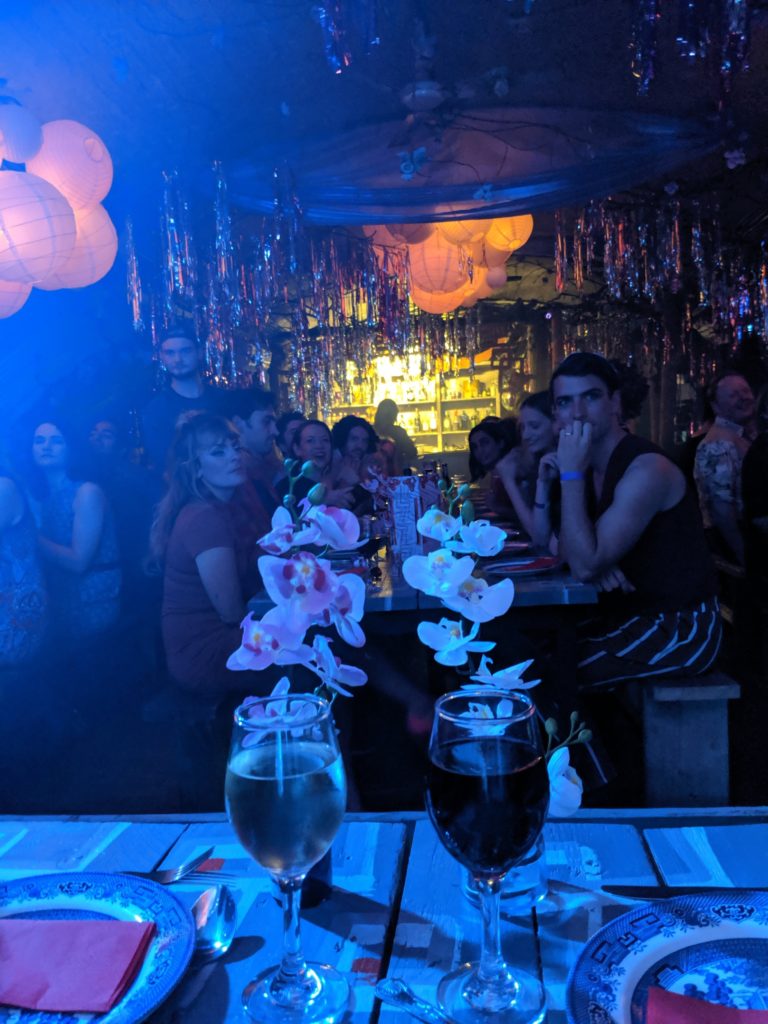 The event takes place in 2 areas, a more relaxed hall seating and a bar, and later you are moved up to the upstairs, with seating tables where dinner is served. Like all dining experiences I’ve been to you end up sitting very closely with strangers, who for this one evening alone become your close friends that you’ll never see again. The drinks selection consists of your usual beer, wine and prosecco alongside a selection of jewel named cocktails, such as Onyx (Harveys Stout, prosecco and lychee) and Amythest (lemon, maraska, maraschino, violette, gin and kiwi). The dinning experience consists of 5 meals with names such as Mama’s Noods (no spoilers), Princess Jizzmine’s Milk, A Romantic Vegetable. and A Happy Ending (told you it was filthy), and despite the raunchy names was actually an amazingly filling (especially that romantic vegetable (trying to make a filthy joke here, not sure if it quite worked)). Vegan options are also available.
All in all, the food was amazing as was the show and the drinks selection. I would definitely recommend seeing it before its gone.
The event can be found at The Vaults in Waterloo and for tickets go to:
https://www.thevaults.london/aladdin-and-the-feast-of-wonders
Previous Post
Next Post